Home » The Largest Racial Disparities in Marijuana Possession Arrests Across the U.S.

The Largest Racial Disparities in Marijuana Possession Arrests Across the U.S.

Where in the United States are black people more likely to be arrested for marijuana possession than white people? Using data from an analysis conducted by the ACLU, we found the 50 counties where racial disparities are the largest when it comes to marijuana arrests. One county in Georgia was found to have an extreme racial disparity in their arrest rates, with black people being 97.2 times more likely to be arrested for possession of marijuana.

Across the 50 states, on average, black people are 3.6 times more likely to be arrested on marijuana charges. This racial disparity has continued to grow over the years as racial profiling among law enforcement has become an increasingly apparent issue. Where has this problem grown the most in the U.S.? We charted out the 20 counties that saw the largest increases in racial disparity in marijuana possession arrests between 2010 and 2018. These huge increases in black arrest rates show how far the United States still needs to go in terms of lessening this racial disparity. 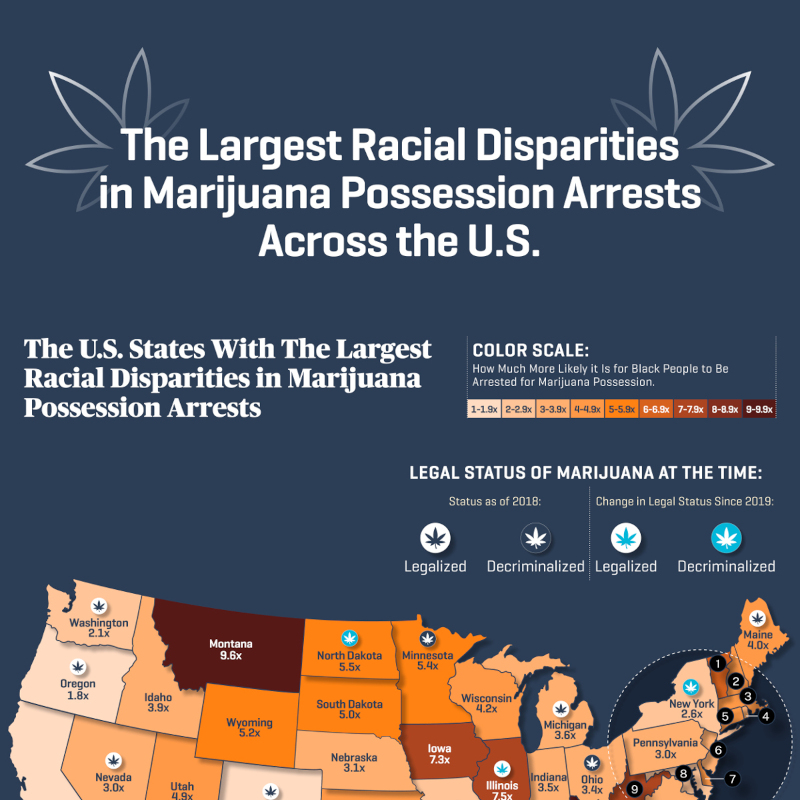 Where Do the Largest Racial Disparities in Marijuana Possession Arrests Occur?

Which States Have Legalized Recreational Marijuana?

Currently, 11 U.S. states have legalized the recreational use of marijuana. The first states to legalize it were Colorado and Washington back in 2012, with nine other states following their lead since then. All of the states listed below, aside from Illinois, had legalized recreational marijuana by the time this data had been collected.

A few of the states that had already legalized by this point still saw higher likelihoods for black people to be arrested for possession, such as Vermont, which was found to have a ratio of 6.1 to 1. Massachusetts and Maine each had ratios of 4 to 1, even though they had both legalized just two years before.

States Where Recreational Marijuana Is Legal

Which States Have Decriminalized Marijuana?

States Where Marijuana Is Decriminalized

This page was last updated by Brian Joslyn